Ancient History – A reflection on Herculaneum and Pompeii in 79AD 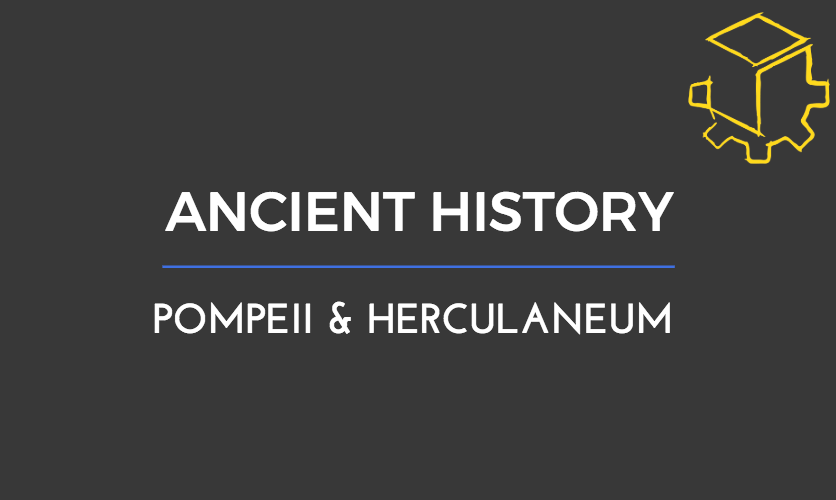 The two towns named in the core study for HSC Ancient History are the famous Pompeii and the lesser known, but equally important Herculaneum. They were (before being ravaged by Mt. Vesuvius) two normal Roman towns located in the Bay of Naples with their own forums, baths, and palestrae. Although, the forum in Herculaneum is yet to be excavated as there happens to be a pesky modern-day town above it. 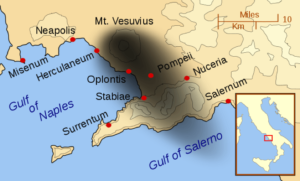 Misenum and around the Bay of Naples in 79 AD at the eruption of Mount Vesuvius (https://upload.wikimedia.org/wikipedia/commons/3/3f/Mt_Vesuvius_79_AD_eruption.svg)

What we know about the eruption of Mt. Vesuvius and the ensuing events come from both archaeological evidence, and documentation written by Pliny the Younger. If you’ve ever heard the term ‘Plinian eruption’ it comes from this guy. He wrote a letter twenty-seven years after the eruption to the historian Tacitus, glorifying his Uncle (Pliny the Elder) who died rescuing people from the base of the volcano.

Pliny was at the town of Misenum when the eruption started, and his uncle wanted to sail down to Vesuvius to get a better look, Pliny didn’t want to go because he was busy doing his homework. It was a “writing exercise” to be precise, so I think us at CoWorks would look fondly on such a commitment to his studies. 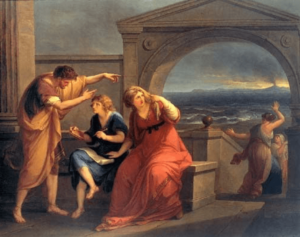 Pliny the Younger and his Mother at Misenum, 79 A.D. (https://commons.wikimedia.org/wiki/File:Pliny_the_Younger_and_his_Mother_at_Misenum,_79_A.D.,_by_Angelica_Kauffmann,_English,_1785,_oil_on_canvas_-_Princeton_University_Art_Museum_-_DSC06494.jpg)

The two towns were destroyed in the coming days, with many people perishing at the hand of nature. However, some would have had it worse than others. I think Herculaneum would have been a far better place of residence when it all went down, and here’s why:

It’s not often that a case of instant death is a good thing, but with Pompeii and Herculaneum, I can’t say it was the worst option. Due to Herculaneum’s geographic proximity of about seven kilometers to Vesuvius itself, it experienced the full force of the first pyroclastic surge. Rocks, dry ash, and heated gases came hurtling towards the town at a searing hot temperature of about 500 °C (Mastrolorenzo, 2010). For the unfortunate people of Herculaneum their cause of death was thus thermal shock. This means they would have died instantaneously, with Estelle Lazer (2009) concluding that their brains boiled and their skulls exploded.

As bad as this sounds, the fate of the Pompeiians was worse. A horrific death alone is bad enough, but they suffered beforehand. This was because by the time the pyroclastic surges arrived at Pompeii the people had been in a state of utter chaos for hours. When Vesuvius first erupted, it released ash, pumice stones, and gases into the air which all had to eventually come back to earth. Given the downward wind present at the time, Pompeii was battered.

Cassius Dio, 2nd-3rd century AD Roman historian gives a striking depiction of the scene, with those that remained fleeing “from their houses into the streets, [and] others from outside indoors”. It would soon be revealed that both of those choices would lead to unfortunate deaths. For those outside, our friend Pliny describes their fate: “… there was a danger from falling pumice stones … as a protection against falling objects they put pillows on their heads tied down with cloths …”. Those indoors did not fare much better. As the cloud came down, the structural integrity of the town was also compromised. Buildings soon collapsed, with ceilings falling on their occupants. Pandemonium reigned supreme.

Almost twenty hours after Vesuvius initially erupted, the pyroclastic surges finally reached Pompeii finishing off the remaining buildings and killing those that remained. By fleeing inside, the Pompeiians’ quite literally sealed their fates as they essentially locked themselves in their own tombs. Lazer’s research of Pompeii revealed asphyxiation as a major cause of death, meaning the people suffocated due to the lack of oxygen in the air.

Whatever your opinion on having your brain boiled is, I would much prefer instant death at Herculaneum than the chaos and horror of being battered by volcanic rocks and ash for hours until my own house crumbled on top of me.

Periphery of Pyroclastic Surges: Evidences at Pompeii. PLoS ONE 5(6): e11127.