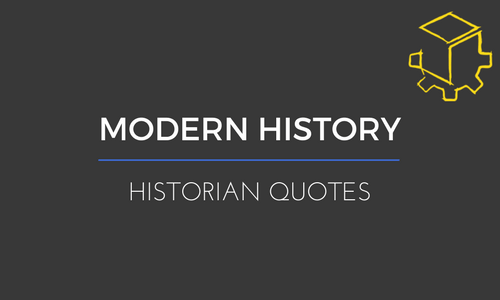 20 years ago I sat my HSC and was lucky enough to receive HSC coaching and as a result Modern History became my favourite subject. I wrote essay after essay as my marks gradually moved into the A Range and I became excited about exam questions!

The topic of 20th Century Germany (Weimar and Nazi Germany) became a life long interest for me. I am fascinated with the circumstances by which Hitler came to power but also how Germany under Hitler’s rule was able to re-arm and become an aggressor in a world that 20 years earlier had seen so much death and destruction.

For me, it was the Historians perspective on the events which really allowed me to understand and critically analyse the period from 1918 to 1939. Using historian quotes to support the position I was developing in my essay responses made things much easier. Knowing my quotes extremely well (90% memorized) allowed me to shape each essay response to suit the question.

As Donald Trump came to power last year I was taken back to my study of Hitler and I couldn’t help but see such an eerily similar rise to power. Does reading this quote by Perloff remind you of anyone? 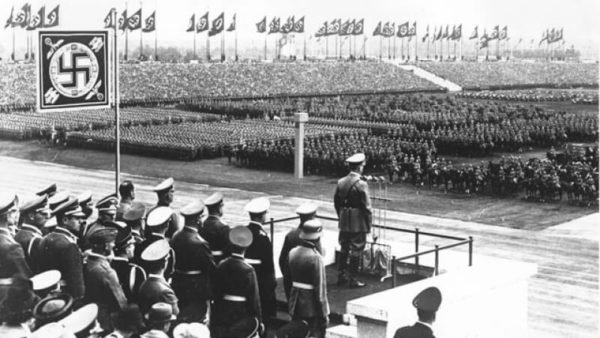 Remember that Modern History essay writing is a skill..

How does anyone learn a skill?

Persistence, practice, resilience and then some more practice.

While knowing your quotes is valuable.. the only way to prepare for the exam room is to practice by responding to actual past HSC and Trial questions, against the clock (ie 40 minutes) and ultimately under exam conditions. Your first few practice essays might be 80 minutes and open book but if you keep practicing, show some grit and keep practicing you will be able to shave some time off each essay as you will be using the same content in each essay, just with a different angle to suit the question. The historian quotes will be a big help in crafting a strong argument for whatever question the examiner gives you.

Here are some quotes I think are very useful and my recommendation is to go through them and explore how each idea supports or contradicts your existing arguments. For the quotes you like, try and include them in your essays and get some feedback from your teacher or an experienced HSC marker on whether it is strengthening your argument.

Fingers crossed that history doesn’t repeat itself and the people can see that Trump’s views are as crazy as Hitler’s proved to be.

Good luck with the study!

“To all the millions of discontented Hitler in a whirlwind campaign offered what seemed to them, in their misery, some measure of hope. He would make Germany strong again, refuse to pay reparations, repudiate the Versailles Treaty, stamp out corruption, bring the money barons to heel (especially if they were Jews) and see to it that every German had a job and bread.”
― William L. Shirer, The Rise and Fall of the Third Reich: A History of Nazi Germany

“No class or group or party in Germany could escape its share of responsibility for the abandonment of the democratic Republic and the advent of Adolf Hitler. The cardinal error of the Germans who opposed Nazism was their failure to unite against it. ”
― William L. Shirer, The Rise and Fall of the Third Reich: A History of Nazi Germany 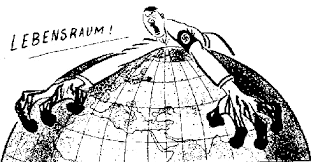 “As the year of 1931 ran its uneasy course, with five million wage earners out of work, the middle classes facing ruin, the farmers unable to meet their mortgage payments, the Parliament paralyzed, the government floundering, the eighty-four-year-old President fast sinking into the befuddlement of senility, a confidence mounted in the breasts of the Nazi”
― William L. Shirer, The Rise and Fall of the Third Reich: A History of Nazi Germany

“The Communist press and political meetings were suppressed; the Social Democrat newspapers and many liberal journals were suspended and the meetings of the democratic parties either banned or broken up. Only”
― William L. Shirer, The Rise and Fall of the Third Reich: A History of Nazi Germany

“The cardinal error of the Germans who opposed Nazism was their failure to unite against it. At the crest of their popular strength, in July 1932, the National Socialists had attained but 37 per cent of the vote. But the 63 per cent of the German people who expressed their opposition to Hitler were much too divided and shortsighted to combine against a common danger which they must have known would overwhelm them unless they united, however temporarily, to stamp it out. The”
― William L. Shirer, The Rise and Fall of the Third Reich: A History of Nazi Germany

“The failure of the duly elected government to build a new Army that would be faithful to its own democratic spirit and subordinate to the cabinet and the Reichstag was a fatal mistake for the Republic, as time would tell.”
― William L. Shirer, The Rise and Fall of the Third Reich: A History of Nazi Germany

“No other party in Germany came near to attracting so many shady characters. As we have seen, a conglomeration of pimps, murderers, homosexuals, alcoholics and blackmailers flocked to the party as if to a natural haven. Hitler did not care, as long as they were useful to him.”
― William L. Shirer, The Rise and Fall of the Third Reich: A History of Nazi Germany

“Those troops [who joined the Freikorps] were for the most part men who had no homes and no jobs to go to, or who were reluctant to return to civilian life. All these Freikorps pursued their own policies and very soon ceased to take any notice of the military leadership. They certainly took not the slightest notice of the despised democratic ministers.”
Helmut Heiber, German historian

“The Nazi Party was, in the early 1920s, but one among many nationalist and volkisch radical political groups. It was catapulted to prominence with the onset of economic recession in the late 1920s… The Nazis owed their spectacular to a combination of two discrete sets of factors: first, their distinctive organisation and strategy; and secondly, the wider socio-economic conditions which created climates of opinion and sets of grievances on which the Nazis could prey.”
Mary Fulbrook, historian

“Nazism seemed to many just an extreme version of what [most Germans] had always believed in or taken for granted. It was nationalistic, respectful of the armed forces, socially conservative, disdainful of laziness, hostile to eccentric or incomprehensive ideas that came from cities, disapproving of homosexuals and other unconventional human types, and avid to achieve ‘greatness’ for Germany. They welcomed parts of the Nazi political and social smorgasbord and told themselves that the rest was less important or was not meant seriously.”
Walter Rinderle and Bernard Norling, historians

“Before total war, Nazism was a pot-pourri. Racialism… and nationalism… jostled shoulders with the socialistic revolutionary conservatism of many members of the Mittelstand (middle class). Romantic ideas came from right-wing youth groups. Hitler could utter the gospel of anti-capitalism to workers and the gospel of profits to businessmen. [It was] a rag-bag of inconsistent and incoherent ideas.”
Walter A. P. Phillips, historian

“The people can always be brought to the bidding of their leaders. All you have to do is tell them that they are in danger of being attacked and denounce the pacifists for lack of patriotism and exposing the country to danger.”
Hermann Goering

“Hitler’s theatricality was linked to his oratorical force. He was persuasive with small groups, but he electrified large audiences.”
Sherree Owens Zalampas, historian

“Hitler’s oratory moved people and appealed to their hopes and dreams. But his speeches malevolently twisted hope into some gnarled ghastly entities, and appealed to the latent, darkest prejudices of Germans.”
Richard M. Perloff, historian

“The idea of a ‘doomed republic’ is difficult to shake off… [but] the fact is, in 1918 the republic’s future was open, its history yet to be determined. Hitler was neither its pre-destined nor its obvious conclusion.”
Anthony McElligott (historian)

“Some commentators have drawn such a stark and gloomy picture of the [Weimar Republic’s] early difficulties that the Republic seems foredoomed to failure from the outset… The conditions in which Weimar democracy were born were certainly not such as to help it flourish; and as it unfolded, it was clearly saddled with a burden of problems, in a range of areas.”
Mary Fulbrook (historian)

“Without the changed conditions, the product of a lost war, a revolution and a pervasive sense of national humiliation, Hitler would have remained a nobody. His main ability by far, as he came to realise during the course of 1919, was that in the prevailing circumstances he could inspire an audience which shared his basic political feelings, by the way he spoke, by the force of his rhetoric, by the very power of his prejudice, by the conviction he conveyed that there was a way out of Germany’s plight.”
Ian Kershaw (historian)

“Education is dangerous – Every educated person is a future enemy.”
Hermann Goering

“All propaganda has to be popular and has to accommodate itself to the comprehension of the least intelligent of those whom it seeks to reach.”
Adolf Hitler

“If you tell a lie big enough and keep repeating it, people will eventually come to believe it. The lie can be maintained only for such time as the State can shield the people from the political, economic and/or military consequences of the lie. It thus becomes vitally important for the State to use all of its powers to repress dissent, for the truth is the mortal enemy of the lie, and thus by extension, the truth is the greatest enemy of the State.”
Joseph Goebbels

“The most brilliant propagandist technique will yield no success unless one fundamental principle is borne in mind constantly – it must confine itself to a few points and repeat them over and over.”
Joseph Goebbels

“Think of the press as a great keyboard on which the government can play.”
Joseph Goebbels

“We have no butter… but I ask you, would you rather have butter or guns? Preparedness makes us powerful. Butter merely makes us fat.”
Hermann Goering

“Industrialisation was a fact of life and the foundation of Germany’s power. For this reason, industry received top priority in Hitler’s calculations… Under Nazi rule, corporate giants such as I.G. Farben, Krupp and Siemens not only grew, but accumulated more economic power and wealth, to the detriment of labour and smaller businesses.”
Joseph Bendersky (historian)

“The development of Nazi economic policy occurred in phases. From 1933 to 1936 the major priority was to overcome the adverse effects of the depression and to restore the economic stability that was crucial to the projection of national power… Autarky was the main goal of the second phase of Nazi economic policies, which began with the official introduction of the Four-Year Plan in September 1936… the goals of the plan were to make the German army and the economy ready for war within four years.”
Roderick Stackelberg (historian)