Do you want to be in what’s being called the “sexiest career of the future”?

It’s not actually that glamorous, but it will be a career that has the opportunity to make some serious coin. 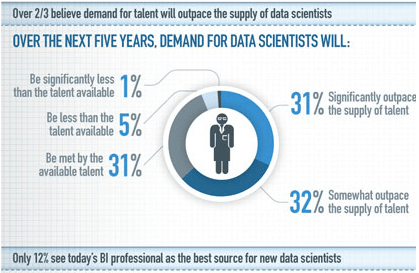 Data scientists are steadily becoming the new wave of IT professionals to see a rise in demand in the future. It’s a career based on studying large amounts of data and analysing it for patterns and predictions. It’s definitely not sexy sounding, but think about the Freakonomics guys, Steve Levitt and Steven Dubner. They have three best-selling books, a popular podcast, travelling to lectures around the globe, and even a Hollywood movie based on their work. Essentially, those guys looked at large amounts of data about money, and made some observations, just as a data scientist would.

And now they’re the rock stars of the economic world. That’s not a bad gig.

So what does it take to get into a job that not only has extremely high hiring rates, but fast salary increases?

The first thing an employer will look for is some higher education in the field of data analysis as well as studies in maths and science. Masters degrees always get looked at more than a bachelor’s degree, but there are some new ways to gain the upper hand on everyone else.

There are popular online courses that offer credits towards degrees. From your bedroom in your mother’s house, you could gaining the knowledge and experience needed to land a seriously cool job. Coursera and DataCamp are among the first to offer these great fats-track plans. EdX.org is also a great way to take courses from MIT, Harvard, and Cornell in the field.

Getting a place in this career means a lifetime of increasing demand, and increasing salary. It’s going to be rated number one on the job charts for many years to come. Those who jump on this chance to get into Data Science early will get more than the worm: they’ll get a promising career for the future.

Find out more about our services here