This will be the final of the three articles that I will have written to assist you all in achieving your dream ATARs. However of the three, this article will be the most important and beneficial, so if you have the time I suggest you read this carefully and thoroughly. I will begin with a brief anecdote to add some context to this article.

Compared to the rest of my grade at school I was never a typically strong student. In the second term of Year 12, our school gave every student in my year an estimate ATAR to let us know how we were all progressing. I had a meeting with the vice-principal, and he basically asked me what course I wanted to get into. I told him that I wasn’t sure yet, but perhaps law was an option. Then and there he abruptly told me that I had no chance of getting into law, and that my current estimate ATAR was 7 points under the projected average ATAR of our school. In short, people expected me to fail in reaching my goal.

Cut to the end of Year 12, and I’m standing on stage watching my name being engraved for outstanding academic achievement in senior school. I have been able to leapfrog the majority of my year and take a place among the elite. Thus my parents and many of my friends and teachers were extremely surprised, and a lot of people asked me if I was too.

The short answer was No.

After my ATAR came out, a lot of people were again surprised, and many questioned how I had so drastically improved in the span of a year. The answer was simply that I had played the HSC game, and played it well. However like any game, you can succeed much more easily, if you know all the rules. Thus in this article I will examine the rules of this game and break down the scaling of each subject.

This was my secret; I hope it can help you too.

** The ATAR calculation is a complicated equation and the views in this article are based on Harrison’s experience and cannot be used as a guarantee for predicting your result. **

How your ATAR is calculated

I believe the majority of you have a brief understanding of how your ATAR will be calculated. That HSC marks are comprised 50% from your school assessments (a set of 5-6 assessment tasks including half-yearly and trial examinations) and 50% from a common external HSC exam paper.

To succeed in the HSC game, it helps to know the rules in more detail. There are in fact 6 stages to calculating your ATAR that you should be familiar with:

Now that we know the rules of this game in more detail, we can use this to our advantage.

Looking at these 6 rules, the first obvious thing that needs to be discussed is the importance of RANKINGS.

Rank Counts for Everything

A misconception that many parents and students have is that school marks actually count for something. So I will set the record straight here.

“Your ranking in each subject is all-important. Your school assessment marks are only important insofar as they determine your ranking in the course; they have no absolute value.”

The process of how the BOS uses your RANKINGS are as follows:

Here are some examples to make this clearer:

Thus your final mark would be an average of the two scores, i.e. 94.

Then your final mark would be an average of the two scores, i.e. 88.

Therefore from the above two examples we can see that your raw school marks do not have a direct bearing on your HSC Assessment Marks. The two points that I want you to take away from this section are:

1. Rank in school counts for everything.

2. Going to a good school means that the distribution of marks is fairly high

Not All Subjects are Created Equal

The typical wisdom for students is to just study as hard as possible for every subject, but due to time constraints in the HSC year, that is just not possible. Instead you will find it much more advantageous if you pick your battles. Strategically allocating time to different subjects can give you the edge over students who study many more hours than you do. To better understand this, a brief explanation of scaling is needed.

Essentially, scaling is the process of standardizing marks so that they can be compared across subjects. Thus the common follow up question to this would be why scaling is needed?

The simple answer to this is that, without scaling, it would be impossible to compare a 92 in 4u Mathematics, to a 92 in Photography. It’s similar to converting currency. When people from other countries come to Australia, how do we know how much their money is worth? We simply convert their money into a single currency (AUD) that is nationally accepted in Australia.

In the same way, the UAC converts all HSC marks into a single UAC score and totals the top 10 units including 2 compulsory units of English. Thus to continue our analogy we can see that not all subjects are equal, with the harder subjects having the highest “exchange rate”. 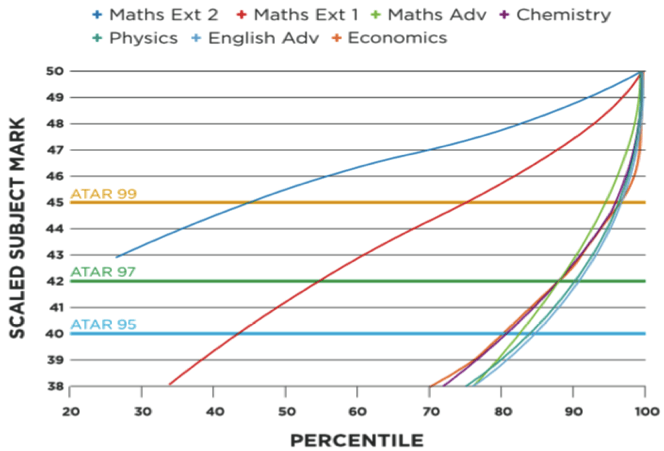 Now that we have established this, we need to know the scaling of the different subjects to be able to pick our battles accordingly. On the next page I have listed out some common HSC subjects in a subject hierarchy to give you a better picture.

** This table is based on the average scaling of subjects accrued from ATAR calculators. 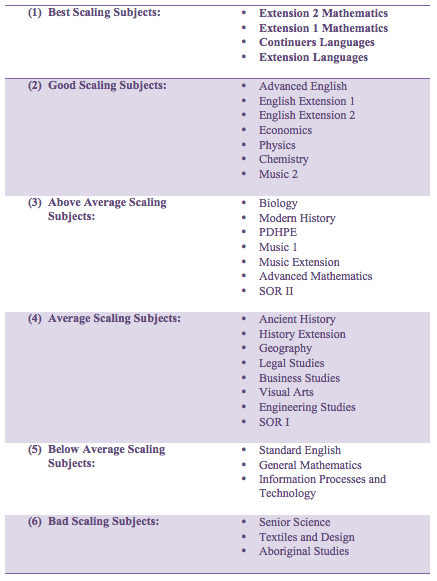 How can I maximize my ATAR (Strategy)

Now we have the information we need to strategically allocate our limited time to ensure maximum results with minimum effort. However before we develop this strategy I would like to clarify two points, that some of you may have questions about at this point in the article.

There are a total of 12 units. The 10 units that will eventually count are the 2 units of English, and her next best 8 units.

Hannah’s strongest subjects are her Mathematics and Economics. Her Modern History and Visual Arts are average. English Advanced is her weakest subject.

Her ATAR goal is 95. She attends a school that is ranked average, academically in the state.

AT THE BEGINNING OF YEAR 12 (STANDARD STRATEGY):

For any student at the beginning of Year 12, or for any student who has not yet established a proper study plan, the best thing to do would be to study according to the units. For Hannah, English Advanced is 2 units out of a total 12 units (17%). Thus out of her total study time, she should be spending around 17% of her time on English.

This is quite self-explanatory and an intuitive thing to do for most students. However it is how a student strategically adjusts his/her time allocation according to their results later on that will separate them from the rest of the pack.

Let’s say Hannah has finished her first two rounds of assessments, and is now deciding how best to prepare for her trials.

Her current ranks are:

This is the only subject that is guaranteed to count for Hannah, so she should be allocating more time into English. In order for her to achieve her goal ATAR, she would need to be ranked in the top 15-20% of her cohort, i.e. in the top 32 of her year.

These are Hannah’s strongest subjects, and also her highest scaling subjects. In order for her to achieve her goal ATAR, she would need to be:

As you can see, her current ranks are much higher than needed. Say she spends 40% less time on her mathematics, and her ranks for both subjects drop by 30. She would still comfortably be achieving the required mathematics marks to reach her goal ATAR, whilst perhaps giving herself an extra hour every day to spend on her other subjects.

These are Hannah’s two worst scaling subjects, and also her two weakest subjects after English. Again it would be much better for Hannah’s overall ATAR, if she re-allocated some of her time spent studying mathematics, and used it to focus on improving her ranks in these two subjects. For some context, to achieve her goal ATAR Hannah would need to be ranked:

Breakdown of the main advice I’m giving you:

Briefly how this strategy helped me

Like I said at the start of the article, I wasn’t doing very well at the beginning of year 12. The main reason being that I was spending too much time trying to come first in Mathematics, whilst basically spending no time on my English and Chemistry.

I realized that I was picking the wrong battle to fight. Coming first in mathematics would require me to study at least 2 hours of math a day and I knew that based on the strength of my cohort, being first as opposed to average, would only equate to a small increase in my overall ATAR. So I tactically decided to allocate these 2 hours to my English and Chemistry.

I knew that I would drop several ranks in Mathematics, but it was a sacrifice I was willing to make, as I knew it would be better for my ATAR in the long run. In fact, I ended up dropping 20 places in 4U, but managed to increase my Chemistry rank by 30 and my English rank by 60, and when my ATAR came out, I leapfrogged a lot of students who traditionally outperformed me.

This has been quite a long article, so I thank those of you who have taken the time to read it. I know a lot of the knowledge, which I have imparted, may seem a little controversial; as most students believe honest hard work alone will ensure that they achieve good results.

Honest hard work is crucial to the HSC, but having a little strategy and understanding scaling can really give you a strong competitive advantage, especially over those people who have the time to study 6-7 hours a day.